How is your club’s midfield unit shaping up heading into the 2020 season?

We’ve gone through all 18 sides to name their four starting on-ballers and the next best midfielders after them, removing players currently injured from the picture.

See which clubs are in the best position heading into Round 1 below:

The Crows have as settled a starting midfield unit as any team in the competition, with the Crouch brothers and captain Sloane comfortably their best grouping. They may be a bit concerned about their depth beneath them and will be hoping some fringe players step up to add to the rotations having lost the likes of Cam Ellis-Yolmen and Hugh Greenwood.

This rotation took the Lions to the top four and it’s hard to see them wanting to make too many changes. The likes of McCluggage, Berry and Rayner are still young and improving, while established trio Neale, Zorko and Robinson at their best bring different skills to the table. The question will be whether Rayner can step up and become a starting midfielder in the group.

David Teague’s first move when he took over was to insert veterans Murphy and Curnow back into the starting midfield alongside Cripps. To that point, Brendon Bolton had been throwing Carlton’s youngsters in there almost exclusively, with Curnow and Murphy playing as half forwards. The Blues will be hoping the transition to the next generation starts to happen in 2020, but the older heads are still their best options. 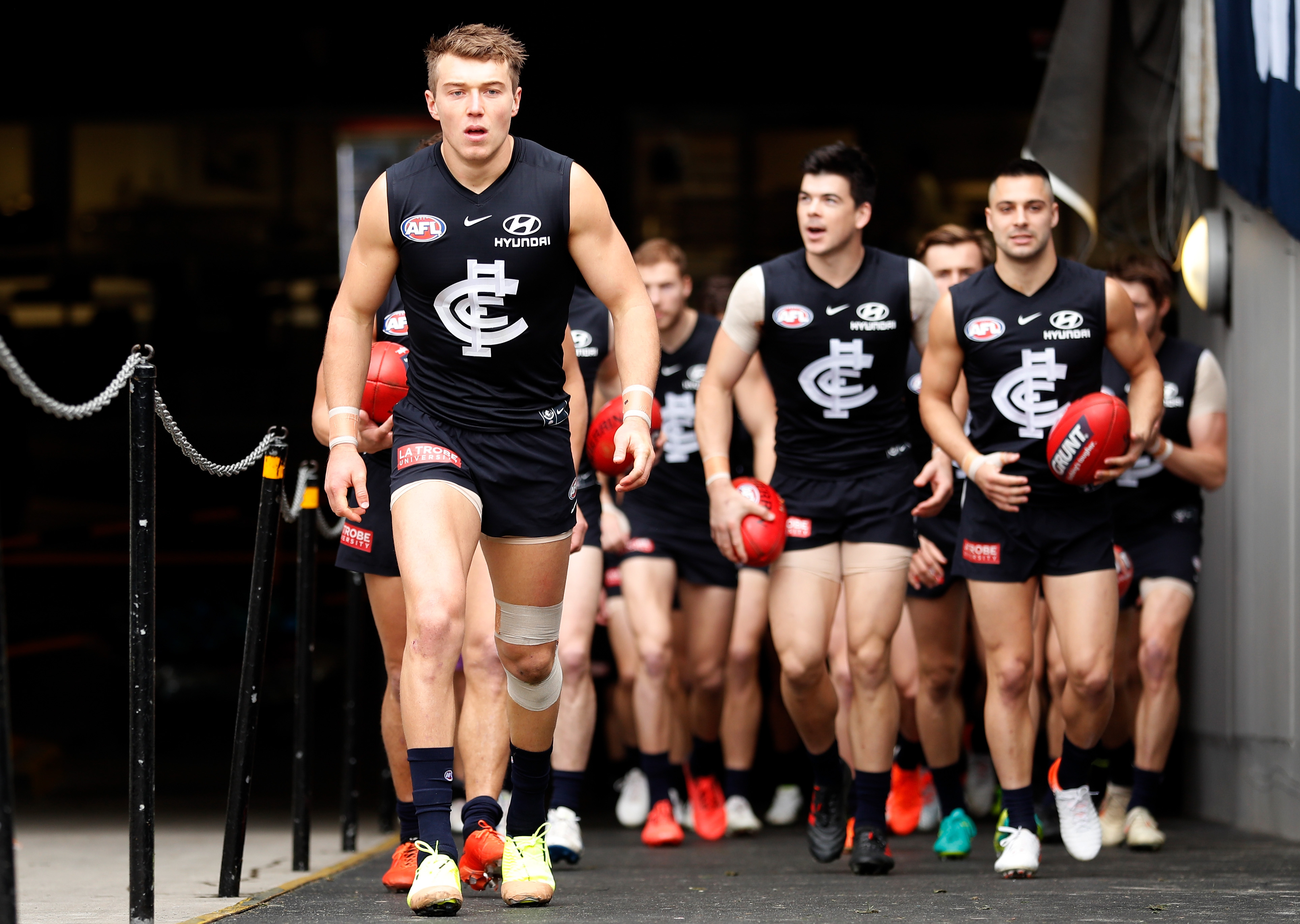 Collingwood are blessed with one of the league’s best midfields, both on paper and when it comes to the crunch. Grundy will take the ruck every week he’s healthy, and experienced campaigners Pendlebury, Treloar and Adams make up the on-ball line. Versatile veteran Sidebottom and hard-running accumulator Phillips are next in, with multi-position gun De Goey, inside bull Wills and the up-and-coming Callum Brown rounding out the full group.

The Bombers will be excited to have Smith back in their line-up for 2020 as they greatly missed his ball-winning ability and tackling pressure. He'll slot straight back in to bolster the already strong on-ball trio of Heppell, Merrett and Shiel. With Smith's return, the Bombers have a strong core with plenty of explosion from the stoppage. McGrath stood out in their Elimination Final loss and should have a bigger role this season. Shaun McKernan appears Bellchambers' only respite until youngster Sam Draper returns.

The Dockers desperately need their young first-round draft picks to start firing given the midfield stars they have lost in the last few years, coupled with David Mundy’s fractured leg. It's not ideal but Michael Walters may again need to spend more time in the midfield despite his team-high 40 goals in 2019 and they could even call on trade period pick-ups Acres and Aish. A healthy year from Stephen Hill would also be handy. Surely it's time for Sean Darcy to be handed the ruck keys following Aaron Sandiland's retirement with Rory Lobb acting as back-up.

Tim Kelly comes out and Jack Steven slots in. The Cats were able to immediately find a replacement for their departing star and if they can get the four-time St Kilda best and fairest up and firing, they’ll be in good shape. Expect to see Geelong integrate younger players into their main midfield unit again this year, but we all know who they will go to when it matters most. Could new addition Josh Jenkins provide ruck support for Stanley?

Matt Rowell is expected to slot straight in come Round 1 and is the favourite to win the NAB Rising Star. David Swallow has been the midfield stalwart for a number of years, while Brayden Fiorini is emerging as a quality young accumulator. While the Suns are still quite young across the board, there’s certainly plenty of talent here to work with, including Rowell's partner in crime Noah Anderson who will no doubt get midfield minutes.

Where do you even start with this midfield group? If the Giants ever get all of their stars out there at once, it is hard to see anyone being able to match them on paper. Ward, Coniglio, Kelly, Whitfield and Taranto are all genuine stars of the competition and are either still in their prime or set to be dominant for years to come. Even when they were crippled with injuries, Zac Williams and Toby Greene stepped in and performed at a strong standard. Sam Jacobs will step in and take primary ruck duties from Shane Mumford.

The Hawks get back their premium clearance midfielder in Brownlow Medallist Mitchell which bodes well given the centre square presence of O’Meara and reigning club champion Worpel. That is a strong trio and with McEvoy giving first use, the Hawks on-ball brigade will get the opportunity to deliver plenty of centre clearances. On call are the likes of Shiels, Scully and Wingard while wingers Isaac Smith and Ricky Henderson are always around the action. Veteran Shaun Burgoyne will again be called upon when Alastair Clarkson needs a lift in the middle, such is his clearance nous. Naturally, Ceglar provides ruck relief for McEvoy.

The league’s best 'hit-out to advantage' player in Gawn gets Oliver, Harmes and Viney to aim at and subsequently they'll be constantly licking their lips. That quartet will begin most games as Melbourne’s on-ball starters.
Nathan Jones is no stranger to spending plenty of time in midfield, despite moving to a more peripheral position in his twilight years, while Brayshaw will roll through and Petracca will often be used for some grunt.
New additions Tomlinson and Langdon will be sliding by on the outside ready to receive anything from the insiders. Gawn receives little assistance but you can expect to see Tom McDonald occasionally pinch-hit in the ruck if Braydon Preuss remsin in the VFL.

Skipper Ziebell has spent a bit of time inside forward across the past two seasons but he is best utilised in the middle where his presence forms a strong unit alongside the classy Higgins and the hard-working Cunnington. Throw in Anderson, who has established continuity, plus developing types Dumont, Simpkin, Davies-Uniacke and co. and you have a more than competitive engine room.
You can set your watch to Goldstein being ever-present in the ruck with some help from talented forward Nick Larkey. The Power’s starting midfield brigade points to usual suspects Boak, Wines and Rockliff taking on a bulk of the workload. Star small forward Robbie Gray will also roll through the middle where he will be joined by Powell-Pepper, veteran Ebert and the improved Amon. Expect second-year starlets Rozee and Duursma to land more midfield minutes in 2020.
While Lycett is the clear number one choice as ruckman, what is nor so certain is who provides support with unproven youngsters Peter Ladhams and Sam Hayes the fall-back options.

The reigning premiers possess a quality starting midfield which has plenty of depth. Prestia went to the next level in 2019 and his presence only makes cornerstone pair Martin and Cotchin even better. The hard-working Nankervis is the main ruck option but is ably assisted by Soldo who was instrumental in their run to the flag. Next in line for the Tigers are the likes of Edwards, Lambert, Graham and at times Caddy which as a ‘second tier’ provides quite a luxury for Damien Hardwick. Throw in promising youngsters Stack, Ross, Shai Bolton and even Noah Balta as ruck relief and the middle of the ground is in good shape for the yellow and black.

Selecting the very best quartet for the Saints is not cut and dried but you can be confident that reigning best and fairest Ross and much improved ruckman Marshall will be prominent. Gresham’s explosiveness paired with Steele’s physicality and tackling aggression provides a nice balance. An injury-free Hannebery would immediately be promoted to the first-choice four while Dunstan and Billings will constantly roll through. New recruits Hill and Jones will operate around the perimeter and youngster Clark is expected to be afforded more midfield minutes. The addition of the experienced Ryder will undoubtedly provide support for the highly rated Marshall.

It will be familiar faces for the Swans with skippers Kennedy and Parker leading the way alongside Hewett. That trio will be feeding off Sinclair who will hold the fort until Naismith is completely up and running. With the retirement of Kieren Jack, is it time for Heeney to make his mark as a permanent on-baller? He will spend time around the contest with the improving Florent, underrated Dawson and developing Rowbottom rotating through. Last year’s leading goalkicker Papley could also make his presence felt in the middle more frequently.

A midfield consisting of Yeo, Shuey, Naitanui, Gaff, Sheed and co. was already super. Throw in Tim Kelly and it becomes scary. The former Cat will add class, grunt and quality finishing to an elite group that will be spurred by a missed opportunity in 2019. Add in Redden and Hutchings with ruck support from Hickey an you have a very strong assembly through the middle.

The Bulldogs have a quality first-choice midfield group fronted by new captain Bontempelli and expertly backed by ball magnets Macrae and Dunkley. Giving them first use is one of the most promising young ruck men in recent history in English. The ‘next rung’ down are not slouches either. Liberatore when in full flight is difficult to restrict, Hunter knocks up getting touches, Smith is developing nicely after an impressive debut season while McLean and Wallis provide extra depth. Add in the talented Lipinski and there is much to like about what the Dogs have around the ball.

The jobs Brisbane staff are doing during league shutdown

Why Buckley has “overwhelming anxiety” over contact with Collingwood players